Historical relationship between Kurd and Baloch.

The Kurds are the ethnical group living in a region known as Kurdistan which is divided into Iraq, Syria, Turkey and Iran. They  are struggling for an independent region since decades and they are famous for their female guerrilla fighters.

On 25 September 2017, the referendum for an independent Kurdish region  was held in Iraq with a turn out of 72 %.

On this important occasion, the historical relation between Kurd and Baloch people is worth discussing.

When it comes to history, every nation tends to find its roots and origin. Same goes with the Baloch people. The Baloch people are always curious  about  finding their roots in history. Even if you  talk to a shepherd in Balochistan, he will be curious to talk about his  tribal or ethnical roots.

The Balochs have always conveyed the history to the next generations in different mediums like poems etc. No Baloch before 20th century had written books on  history  or origin of the Baloch nation .
Balochs have always lived  a semi guerrilla and semi nomadic life.They never lived in urban civilizations or near fertile lands and water. They preferred  to live in mountainous regions. This can be the reason they never wrote their history. But other neighboring nations have written on history of Baloch people. Even the invaders like British were interested in knowing and writing about the Baloch history.

The famous Persia poet Abu Qasim Firdousi (c. 940-1020)  in his Epic Shahnameh (story of Kings)  had written about the participation of Baloch in different battles.

An army of warriors of Koch and Baloch,
Scheming war like the fighting-ram,
No one in the world has seen them turn their backs,
No one has seen as much as one of their fingers unarmed.


Historians like Meer Gul Khan Naseer and Longworth Dames emphasized on the Kurd  origin of Baloch and according to them Kurd and Baloch are from a same origin  but due to some historic battles, Baloch had to migrate from Kurdish lands.

Gul khan Naseer in his book 'History of Balochistan' throws light on three migrations that would have taken place. According to him, Balochs and Kurds used to live in Alburz mountains in Caspian region .The  Ruler of Persia Shah Nosherwan and the Balochs were at daggers drawn with each other. So Shah Nosherwan took  the decision of genocide of Baloch people. He established a gigantic army against Baloch tribes and in a sudden attack,  his army killed about 200k Balochs. The remaining Balochs left Alburz mountains and migrated in  different directions in three different groups.

As explained above, Balochs and Kurds used to live in Alburz mountains in Kurdistan. This region is still known with the same name. And the word burz which means high is found in Balochi, Bravi and Kurdish languages only.

Both Baloch and Kurd claim to be the descendents  of Medes.  Medes were the rulers of Median Empire. 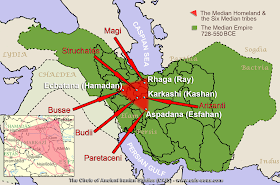 Some historians claim that the Bravi  language of Baloch  was previously known as Kurdgaal i.e., language of Kurd.

Again,  some historians claim that Baloch and Kurd were inhabitants of Mehrgarh civilization( 7000BC-5000BC) discovered in Balochistan and due to any reasons, some Baloch and Kurd tribes would have migrated from Mehrgarh to Kurdistan and when faced with harsh circumstances, the Balochs returned to their original homeland. The Balochs already living here welcomed them with opened  arms.

Whether  Baloch  are descendant of Kurds or Kurds are descended of Baloch, there is a historical  relationship between these two Nations.

'The Kurds are from the same origin as that of Baloch. The period of their migration from the Caspian region may be a few centuries earlier than the Baloch who followed at a later period; but instead of going to their people in Zagros mountainous region, outskirts of Mesopotamia, they headed towards east.   Linguistically and culturally they must have been from the same stock." Janmahmad; The Baloch Cultural Heritage, 1982.

In order to find out the roots of one's Nation,  the historians compare the languages,lifestyle, the tribal structure, and  social structure of  one nation with other nations  so that they can find out the similarities between the two nations and by finding the similarities the historians  come up with hypotheses that whether there are any historical relations between the two nations or not.

When it comes to finding similarities between Baloch and Kurd nations, we find many things that are similar in both nations. The Balochi and Kurdish languages share a vast number of  common words.

Kurds speak different dialects. One of the dialects spoken by Kurds is Badini and Badini is a tribe in Baloch. The largest Baloch tribe in terms of population is said to be Mohammed hasni. It is pronounced Mamsani in Balochi and Bravi.  Mamsani is used as a surname by Kurds of Iraq and Syria.
Sherzad Omer Mamsani is an official in Kurdistan region of Iraq.

Besides this,there is a Kurd tribe in Baloch  which gives a strong basis for historical relations between these two nations.

The scientific advancements have contributed a lot  in tracing the origins of nations  and with the study of genetics , humans are now able to answer the questions which were not possible in past. With help of genetic engineering,the relationship between different ethnicities can be studied now.
DNA samples of both Baloch and Kurd people  were compared and the result were astonishing.

Unfortunately, the sufficient work has not been done to uncover the concealed secrets of history. The young and modern historians need to put great efforts on studying and writing history on scientific basis.